In southern Colorado at 8,000 feet there is a jewel, the San Luis Valley. This green oasis in ringed by snow capped mountains reaching 14,000 feet. The Rio Grande River begins its journey to sea here. Tucked in the Northeast corner is an oddity. Sand dunes, not just any old dunes, but the highest sand dunes in North America. They seem so out of place in this lush green valley and wetlands. 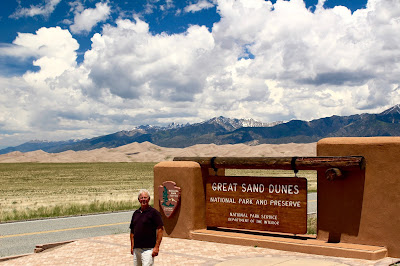 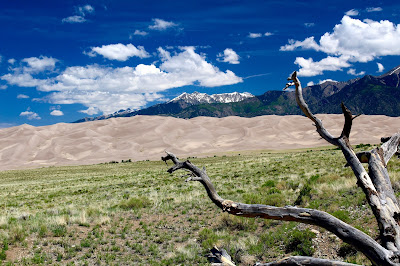 The Great Sand Dunes tucked up against
the Sangre de Cristo Mountains.

Most of the sand forming the dunes originated, not in the adjacent Sangre de Cristo Mountains, but in the San Juan Mountains on the west side of the valley, 65 miles away. 400,00 years ago prevailing south-westerly winds moved the sand northeast until stopped by the Sangre de Cristo Mountains.
But you ask, how did they become the tallest dunes.
Less frequent, but stronger apposing storm winds from the north-east tried to move the sand back to where it came from. The apposing winds did not allow the dunes to move either Southwest or Northeast. What they did was pile the sand higher and higher until the dunes reached their present hight of 750 feet, the tables in North America. 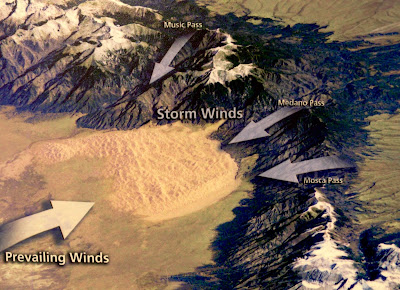 Medano Creek runs along the South side the dune field. Not deep, but cool and refreshing on a hot spring day. 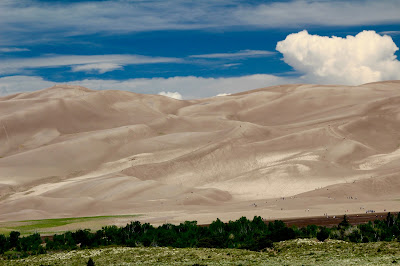 The black specks are motivated people climbing the dunes.
Some are at the top on the left side of the photo. 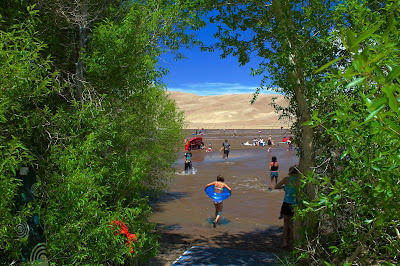 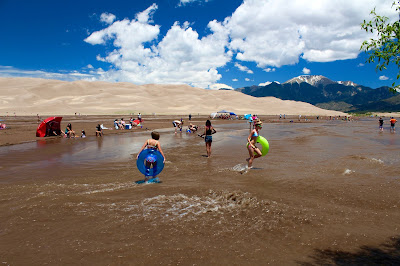 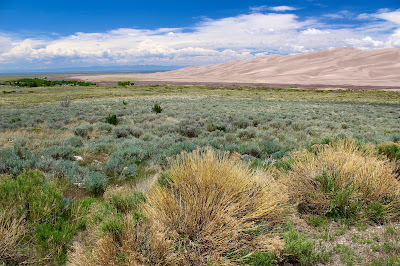 Looking at the southern end of the dunes and
the San Juan Mountains in the distance.